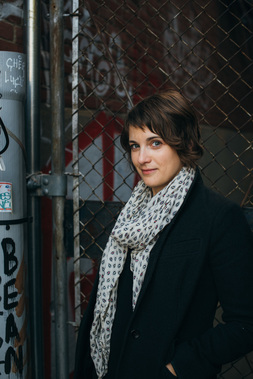 The serious bio:
Natalie C. Anderson is an American writer and international development professional based in Geneva, Switzerland with her husband and son. You can also sometimes find her in the mountains of North Carolina or Nairobi, Kenya. She spent a decade working with NGOs and the UN on refugee issues around the world, mainly Africa.

Natalie was selected as the 2014-2015 Associates of the Boston Public Library Children's Writer-in-Residence, and is the author of CITY OF SAINTS AND THIEVES, and LET'S GO SWIMMING ON DOOMSDAY, published by G.P. Putnam's Sons Books for Young Readers, an imprint of Penguin Random House.

The real deal:
I grew up quasi-feral in a lush pocket of the Appalachian Mountains. Even though I haven't lived there since I was 16, if you ask, that's home. The two main rules growing up in my house were do your homework and don't lie. Everything else was up for persuasive argument. Our home was a magnet for errant animals (live ones) and at some point we became known as the people who will taxidermy road-kill if you bring them something interesting (dead ones). I went to art school, was a university drop out for a while, did AmeriCorps in Seattle, finished school, did some more school, lived in Africa for a long time, was a leatherworker, a bartender and a social worker at various points. I married a very handsome and charming man. I have a kiddo who is my bliss. I have stamps for cool places like Djibouti and Brunei in my passport. (boo-yah! (I know, no one says boo-yah anymore. That's how old I am)) I like to play in the dirt. I like salt so much that my husband once got me a salt lick for Christmas. My favorite thing to do is probably eat food. I wrote a book. I hope you like it. ~The End~